Florida was part of the confederacy during the Civil War, but Union troops occupied St. Augustine and controlled the city during the war. Lincoln's Emancipation Proclamation of 1862 upheld freeing of the slaves, and land along what was the west bank of Maria Sanchez Creek was leased to freed slaves after the war ended. This section of St. Augustine was initially called Little Africa, but became known as Lincolnville after the streets were laid out in 1878. The district remained static until the late 1800s, when segregationist practices spawned the growth of black owned and operated businesses there and a high level of political activity. The area had narrow streets, small lots, and houses built close to the street, similar to sections of colonial St. Augustine. Washington Street in the district became the heart of the black business community.

The Lincolnville district contains the largest concentration of Victorian-era residences and churches in the city, many built in the late 19th and early 20th century by black carpenters. Yallaha Plantation House on Bridge Street, built in 1800, is one of Florida's oldest residences, named for the orange grove plantation which was formerly part of the peninsula.

During the mid-20th century Civil Rights era, Lincolnville was the base of activists who struggled for the end of racial segregation in schools and public facilities in St. Augustine. Rev. Martin Luther King Jr. and activists from other parts of the country came to join local activists in non-violent protests. Hundreds were arrested and filled the jails; their struggle brought national attention to the issues and aided Congressional passage of the Civil Rights Act of 1964. A brochure for a self-guided tour of civil rights landmarks is available at the St. Augustine Visitor Information Center. In 1991 the Lincolnville Historic District was documented and its 45 blocks were listed on the National Register of Historic Places. The district is bounded by Cedar, Riberia, Cerro and Washington Streets and DeSoto Place. 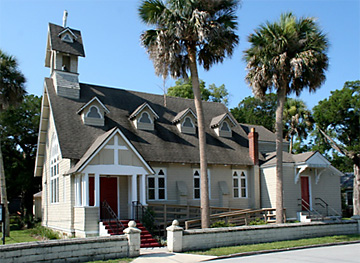