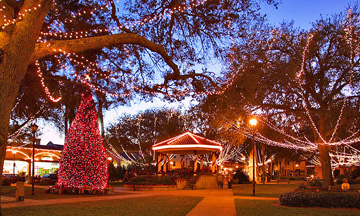 The oldest public park in the US, the Plaza de la Constitucion has been a center of life in St. Augustine since the 16th century Spanish Period. Now a National Historic Landmark, the Plaza was established by Spanish Royal Ordinances in 1573, which required a plaza for government, church, and public use. Spanish plazas typically began at the waterfront, so it could be seen, and was oriented to the compass points and sized with length equal to 1-1/2 times its width. The Spanish era public and government buildings were constructed facing the Plaza. Among those still standing are the historic Government House, now a museum of the city's history (built 1706-1713), and the Cathedral-Basilica of St. Augustine (built 1793-1797), now the cathedral of the Roman Catholic Diocese of St. Augustine.The Plaza itself has an old public well dating to the 1600s, a historic public marketplace, monuments to Revolutionary, Confederate, WWII, Korean and Vietnam veterans, civil war cannons, a gazebo used for live entertainment, Foot Soldiers Monument to commemorate the civil rights movement, and a 19th century obelisk to celebrate the Spanish Constitution of 1812. The Plaza is the centerpiece of the historic district of the nation's oldest city, surrounded by museums, historic structures, restaurants, shops, fascinating architecture, and many points of interest. During the annual Nights of Lights celebration, the Plaza is enchanting, with tiny white lights draped over its huge trees.