St. Augustine, being America’s oldest city, has a colorful history of four centuries and many legends of ghostly figures. Some believe that the ghost of a young house servant haunts St. Francis Inn. She has become know as “Lily” and strange happenings reported in one third floor Inn room lead to it being named “Lily’s Room”.

A story is told of a young man who lived with his uncle, Major William Hardee, who owned the Inn during the middle of the 19th century. He fell in love with “Lily,” one of the young black servant girls, believed to have been a beautiful slave woman from Barbados, and they would sneak into rooms of the inn to carry on their secret love affair. When the uncle, a military officer, walked in on the lovers, he dismissed the servant and ordered his nephew to never see her again. The nephew, deeply depressed, killed himself, some say by hanging himself in the attic, now Lily’s Room, others say by jumping from the third floor window.

For years, Inn guests and employees have reported apparitions of the ghost, in Lily’s Room and in other parts of the Inn. Some have seen her passing in the hall, all dressed in white. Maybe she returns to find her lover. One housekeeper tells of listening to MTV on the television while cleaning Lily’s Room. When she returned from getting clean sheets in the hall, the television was turned off. She jokes “Lily didn’t like MTV!”

Interesting phenomena have been reported by guests about Lily and her soldier lover. A woman staying in Lily’s Room was awakened by a loud noise and woke to find the contents of her pocketbook scattered across the floor. Nothing was missing and she said the thud was too loud to have been merely the sound of the purse falling. A guest found her cosmetic bag full of water, while another found her makeup bag under an open window had stayed completely dry while the driving rain had soaked everything around it. A male guest found himself under the bed when he woke in the morning, and had to get help to free himself. In another occurrence, a new bride was awakened by a passionate kiss, then surprised to find her husband was sleeping soundly beside her. Other reports include sightings of a hand on the railing of the back stairs, a ghosted figure dressed in white passing in the halls, split second sightings of spirits, frequent sounds of whispering and moans, lights and coffee makers going on and off unassisted, radio stations being changed as witnesses watched, locked doors found open, shower water which comes out hotter and hotter no matter how much cold is added, falling books, moving pictures, icy cold touch, covers being removed, and female and male apparitions. Some psychics who have been to the Inn conclude that Lily and her lover have not been united in the afterlife within the Inn they haunt.

Was it the resident ghost who caused a disturbing evening for another guest? He and his wife were staying at the Inn, but in a room other than Lily’s Room. His wife fell asleep quickly, but he had trouble. A strange sensation overcame him suddenly, which he said felt like someone was entering his consciousness, without seeming either good or evil. He left the room to see if a short walk would help, then returned to bed only to have the same feeling, and he attempted to allow it to become stronger. After what he thought was a long time, he shook off the feeling and went for another walk and some coffee, finally returning and able to fall asleep.

Fortunately, the recalled paranormal events at St. Francis Inn have been described as friendly, though sometimes mischievous, but not harmful. Many describe their apparitions as being pleasant, not disturbing. Many guests are attracted by the possibility of a ghostly encounter.

On your visit to St. Francis Inn, please let the innkeepers know if you have a paranormal experience.

Paranormal Investigations:
A number of ghost hunters have visited St. Francis Inn and reported happenings indicating several spirits inhabiting the Inn. Marlene Blanchard, an investigator with Left Field Paranormal Studies & Investigations, conducted several studies of paranormal activity at St. Francis Inn, with positive results including visual phenomena recorded on video. The report included a video camera being turned off, a pocket watch stopping at the exact time the video camera stopped, cell phone not able to hold its charge in the suite, still cameras photographing multiple orbs, and repeated knocking/rapping heard with source not able to be located.

Also recorded in this study:
“Approximately 2:15am a tall, slender Hispanic male, dark, wiry hair pulled back into a short ponytail, dressed in a white silky shirt and dark trousers, appeared on the left side of the room. He paced back and forth in the space between the bed and the dressing table from the window to the open door leading to the sitting room. He exited the door leading into the sitting room. An older male, dressed in brown, with a brown tri-cornered hat, appeared from the left side of the room, walked on through to the sitting room. Neither seemed to be aware of the two people in the bed.”

More Information…
The St. Augustine Historical Society maintains a library with records of the oldest city’s early years, which may interest those wishing to learn more about the city’s background.
Accounts of paranormal activity in St. Augustine and at the St. Francis Inn can be found in several books:

Be sure to see our innkeepers about joining a guided walking evening Ghost Tour of old St. Augustine, a trolley tour with stops at haunted buildings and cemeteries, a maritime ghost tour, or one of the others offered during your stay.

Better yet, book our Ghostly Getaway Package called “Paranormal Paranoia,” which includes the Ghost Tour for 2, two books about local ghosts, ghostly tee-shirts, and a recommendation to stay in one of the Inn’s more active accommodations: Lily’s Room, Anna’s Room, Elizabeth’s Suite, or Garcia Suite. 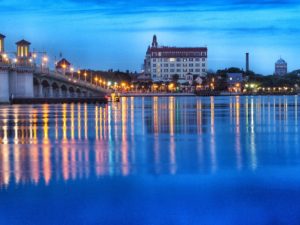 How to Get to St. Augustine

How to get to St. Augustine? There are many options depending on whether you prefer a quick flight, a drive 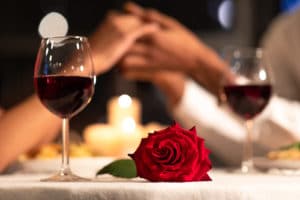 Romantic Packages at Our St. Augustine Bed and Breakfast

Our St. Augustine Bed and Breakfast will be your ultimate romantic getaway for you and your loved one! Enjoy the 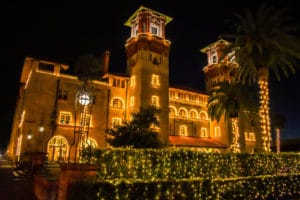 Get Ready for St. Augustine Night of Lights 2020

The St. Augustine Night of Lights is a stunning city-wide holiday display that is sure to be an unforgettable experience!