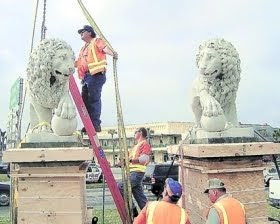 Nearly a year after the rehabilitated Bridge of Lions reopened to traffic, its namesake statues will be brought home to symbolically protect the city.

City officials announced Wednesday that the two marble lion statues will be re-installed during the early morning hours of March 15. The project is expected to last four hours and will require closing the bridge to traffic from 2 a.m. until 6 a.m. that day.

The lions stood patiently at the western approach to the bridge from its opening in 1927 until rehab work on the bridge began in Feb. 14, 2005.

Their placement will not damage the landscaping installations, which started in early February.

The only road closure will be the Bridge of Lions itself, although temporary detours may be implemented by the St. Augustine Police Department.

The statues were removed by the City of St. Augustine, their owners, before the start of the rehabilitation work and placed in storage for safe keeping. While they were stored in a controlled environment, the city contracted to have them restored.

The Florida Department of Transportation provided a grant of $40,000 for the relocation, storage and restoration of the statues. The restoration work was done by Enzo Torcoletti and Joe Segal of Moultrie Creek Studios, St. Augustine.

The project is managed by the city’s General Services Department and the relocation will be handled by Southeastern Rigging & Storage, Orlando, a company experienced in the relocation of large objects and fine art.

After the lions are back in place, the bridge project will still not be complete.

Still to come are the landscaping in parks on both the east and west approaches to the bridge as well as the Ponce and Anderson traffic circles.

That work should be done by spring.

The lions were a gift to the city in 1926 by Dr. Andrew Anderson, a native of St. Augustine who became a close friend of Henry Flagler and served as the city mayor in 1886.

Anderson is responsible for giving a number of public monuments to the city, including the statue of Ponce de Leon, which stands in a small park just east of the Plaza de la Constitucion and the flag pole and monument base just to the north of the Ponce statue.

Since the time of the installation is not spectator-friendly, and the area where the installation taking place is restricted, the city requests people wait to welcome the lions until later in the day after they have returned home.

For information, call the city’s Public Affairs Department at 825-1053. 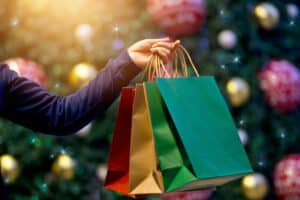