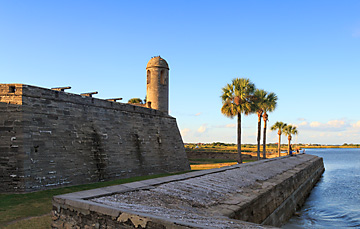 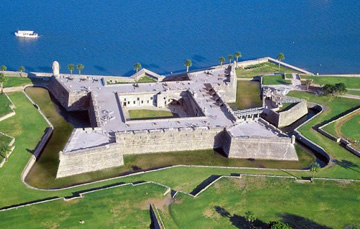 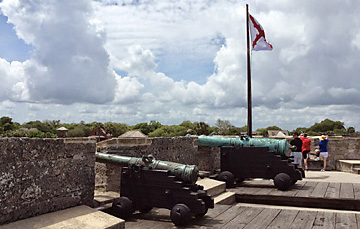 St. Augustine's fort is a great tourist attraction and exceptional historic site, intriguing visitors of all ages. As the oldest masonry fortress in the continental US and only surviving 17th century military construction in North America, the Castillo de San Marcos ("Castle of St. Marks") is located on 21 acres on Matanzas Bay in the city of St. Augustine. After founding St. Augustine in 1565, the Spanish settlers found their most significant threat was from the British, attempting to establish strongholds in Florida, Carolina and Georgia Colonies. Sir Francis Drake led a successful raid in 1568, sacking, looting and burning the settlement in St. Augustine, including the wooden fort. Nine forts, all constructed of wood, were built for protection of St. Augustine in its early years.

The building of the Castillo de San Marcos, a masonry fort, took place from 1672-1695, partly in reaction to the founding of Charleston by the British. The Castillo's massive coquina limestone walls, quarried across the bay on Anastasia Island, still stand as evidence of the clashes between cultures during the colonial period of our nation's history. Its survival is legacy to the craftsmanship of the engineers and laborers who constructed it.

Through a 1763 peace treaty to end the French and Indian War, the British finally gained what they failed to take by force, as Florida was ceded to Great Britain as part of settling the French & Indian War. The fort, renamed Fort St. Marks, protected British St. Augustine for twenty years. Spain sided with the 13 colonies during the Revolutionary War and secured the return of Florida after England's defeat. In the early 1800s, Spain struggled to retain its western hemisphere colonies. The expanding United States considered Florida vital to its interests. In 1821, a treaty peacefully turned East and West Florida over from Spain to the United States as a territorial possession. Florida was accepted as a state in 1845. The Castillo de San Marcos was also the stage for confrontations during the War of 1812, the Patriot Revolt, the Second Seminole War, and the Civil War (as US Fort Marion). It was used as a prison for American Indians during the late 1800s and played a minor role in the Spanish-American war, as a hold for deserters. It was abandoned by the U.S. Army in 1900 and declared a National Monument in 1924.

You can explore the fortress with a self-guided tour, join an interpretive talk with a park ranger, watch the 20-minute video, view  weapons demonstrations, cannon firings, and re-enactors presentations, take in a special event on the grounds, and picnic on the bayfront green surrounding the fort. The Castillo de San Marcos is open to visitors every day except Thanksgiving and Christmas days. An adult entry fee is charged, and is valid for 7 days, with certain passes accepted for free admission. Parking is available in the lot at the fort ($1.50 per hour), where passengers can also be dropped off and picked up, and at the city parking garage one block away. The average visitor spends between one and two hours touring the Castillo de San Marcos National Monument, often returning for more than one visit. The Castillo is on the St. Augustine Bayfront, north of the Bridge of Lions.